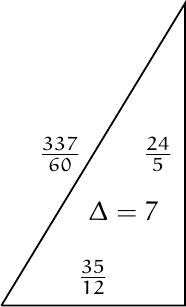 A number is called congruent it is the area of a right triangle with rational sides.

For example (see Figure aside), 7 is congruent because

is congruent if there exist 3 rational squares

in arithmetic progression such that

The problem of determining if a number is congruent is old and difficult. The numbers involved are often very large. For example, according to Zeigel, 157 is proved congruent by the right triangle with legs

A major advancement has been the characterization provided by J.Tunnell. He has proved that if the Birch and Swinnerton-Dyer conjecture is true, then an odd squarefree number

is congruent if and only if the two sets

have the same cardinality. A similar relationship holds for even squarefree numbers.

You can download a text file (primitive-congruent-mod123.txt) of 1.6 MB, containing a list of the squarefree congruent numbers below

. To save further space the numbers of the form

which are all congruent, are omitted from the list.

Below, the spiral pattern of congruent numbers up to 2500. See the page on prime numbers for an explanation and links to similar pictures.

Pictorial representation of remainders (mod 2, 3, ...,11) frequency. For a table of values and more details click here

A graph displaying how many congruent numbers are multiples of the primes p from 2 to 71. In black the ideal line 1/p.