• H. Harborth proved that, given 10 points in general position, there are always five of them which are the corners of a convex pentagon that does not contain any of the remaining points.

• Marion's theorem states that the area of the central hexagon determined by trisecting each side of a triangle and connecting the points as shown below, is 1/10 of the area of the triangle. 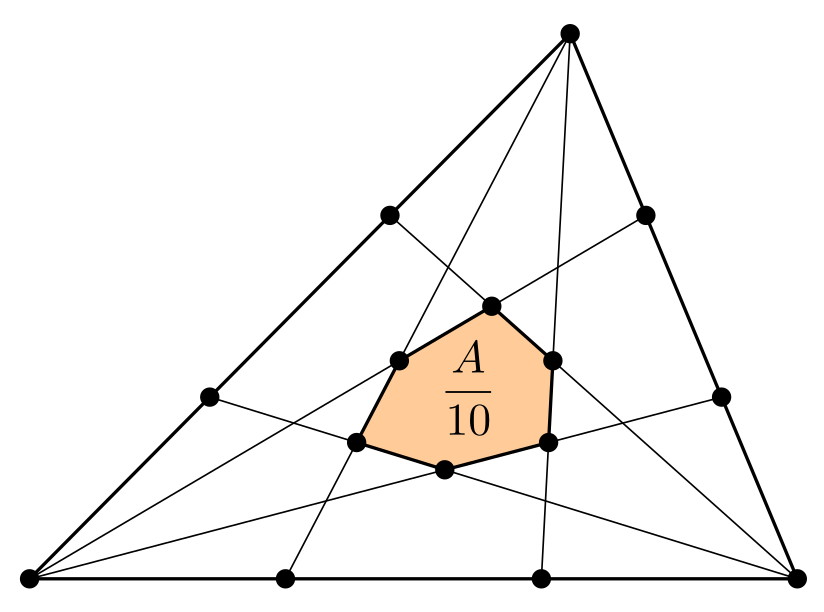 It is a happy number.

10 is nontrivially palindromic in base 3, base 4 and base 9.

10 is digitally balanced in base 2, because in such base it contains all the possibile digits an equal number of times.

It is a Cunningham number, because it is equal to 32+1.

10 is a nontrivial binomial coefficient, being equal to C(5, 2).

It is a Harshad number since it is a multiple of its sum of digits (1).

It is a super Niven number, because it is divisible the sum of any subset of its (nonzero) digits.

It is the 8-th Perrin number.

It is a panconsummate number.

It is the 3-rd tetrahedral number.

A polygon with 10 sides can be constructed with ruler and compass.

10 is the 4-th triangular number and also the 2-nd decagonal number.

10 is the 3-rd centered triangular number and also the 2-nd centered nonagonal number.

10 is a deficient number, since it is larger than the sum of its proper divisors (8).

10 is an equidigital number, since it uses as much as digits as its factorization.

With its predecessor (9) it forms an eRAP, since the sums of their prime factors are consecutive (6 and 7).

10 is an evil number, because the sum of its binary digits is even.

The sum of its prime factors is 7.

The product of its (nonzero) digits is 1, while the sum is 1.